John Maynard Keynes is often considered one of most influential classical economist, largely for the interventionist policies of Keynesian economics.

Below is an excerpt from a biography of John Maynard Keynes included with our books.

The birth date of Keynes’s birth was recorded on 5 June 1883 in Cambridge, England. Keynes attended The Perse School nursery in 1890 before becoming a day pupil at St Faith’s preparatory school in 1892. Keynes went to Eton College in 1897. His father, John Neville Keynes, was an economist and a lecturer in moral sciences at the University of Cambridge and his mother Florence Ada Keynes was a local social reformer.

John Keynes studied at the King’s College, Cambridge when he was 19 and studied mathematics. In May 1904 he received a first class B.A. in mathematics from Cambridge.

Keynes’s Civil Service career began in October 1906, as a clerk in the India Office .

He resigned his position in India Office to return to Cambridge and worked on probability theory in 1908. In 1909, Keynes accepted a lectureship in economics funded personally by Alfred Marshall. In 1911 Keynes was made editor of The Economic Journal. He published his first book in 1913, Indian Currency and Finance.

In January 1915 Keynes took up an official government position at the Treasury.

Keynes’s The Economic Consequences of the Peace was published in 1919 and the work has been one of Keynes’s best books.

At the height of the Great Depression, in 1933, Keynes published The Means to Prosperity, which contained policy recommendations to address unemployment in a global recession mainly through public spending.

Keynes’s greatest work, The General Theory of Employment, Interest and Money was published in 1936. The work is served as a theoretical foundation for the interventionist policies and is viewed as the foundation of modern macroeconomics. Few senior American economists agreed with Keynes through most of the 1930s except Alvin Hansen in Harvard.

After World War Two, Keynes proposed the creation of a common world unit of currency and the new global institutions – a world central bank and the International Clearing Union. The two new institutions, later known as the World Bank and International Monetary Fund (IMF), were founded as a compromise that primarily reflected the American vision.

Before Keynes’s death in 1946, he said “I find myself more and more relying for a solution of our problems on the invisible hand (Adam Smith’s invisible hand in Wealth of Nations) which I tried to eject from economic thinking twenty years ago.” 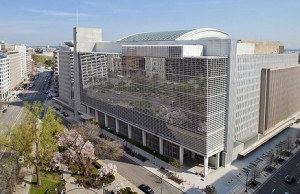 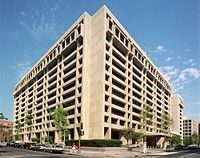 The IMF Headquarters in Washington D.C.