Henry George was a notable American political economist. He inspired the economic philosophy of Georgism, which still influences modern America.

Below is an excerpt from a biography of Henry George included with our books.

The birth date of Henry George’s birth was recorded on October 29, 1839 in Philadelphia, Pennsylvania. He attended Episcopal Academy in Philadelphia.

Henry George finished his formal education at age 14 and he went to sea as a foremast boy at age 15 in April 1855. He did not receive any higher education. 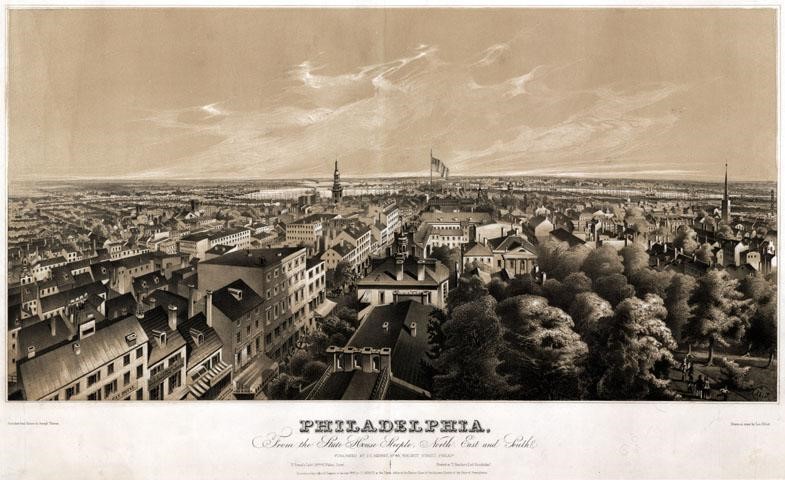 Philadelphia, where Henry George was born.

Henry George returned to Philadelphia after 14 months at sea from Melbourne and Calcutta and he became an apprentice typesetter before settling in San Francisco, California.

Henry George began as a Lincoln Republican, but then became a Democrat. He was a strong critic of railroad and mining interests, corrupt politicians, land speculators, and labor contractors.

Furthermore, on a visit to New York City, he was struck by the gap between the poor and the rich in the long-established city. These observations supplied the materials for his 1879 book Progress and Poverty that sold over 3 million copies. In 1880, George moved to New York City.

In the book Progress and Poverty, Henry George made the argument that a large portion of the wealth created by social and technological advances in a free market economy is retained by land owners and monopolists through economic rents. The concentration of uncreated wealth by human is the main cause of poverty.

In 1886 George campaigned for mayor of New York City as the candidate of the United Labor Party, the short-lived political society of the Central Labor Union. He polled second, more than the Republican candidate Theodore Roosevelt.

The election was won by Tammany Hall candidate Abram Stevens Hewitt in 1886.

In the 1887 George campaigned for Secretary of State of New York and lost in a distant third.

Henry George’s political position is against Chinese immigration to the States. Although he thought that immigration restriction to Chinese would no longer be necessary in some situations and admitted his first analysis of the issue of Chinese immigration was “crude,” he defended many of these statements for the rest of his life.